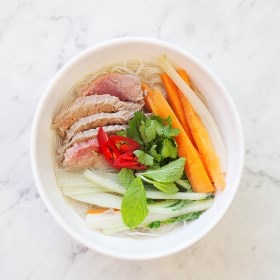 Place noodles in bowl, cover with boiling water and set aside for five minutes. Once noodles are soft, rinse under cold water to stop the cooking process.

Add stock and fish sauce to the saucepan and simmer for seven minutes.

Add in bok choy and carrot and simmer for two more minutes.

Divide the noodles between two bowls and top with thinly sliced beef.

Pour hot broth over the top of the noodles and beef and squeeze the lime over both bowls. Serve topped with mint, coriander and chilli. Note: The broth will cook the thinly sliced beef.